Venture about 15 miles southwest of Manchester — the Granite State’s largest city — on Route 101, and you’ll happen upon the village of Amherst, New Hampshire. Originally chartered in 1728, the Common anchors this small hamlet, inviting visitors to explore the historic architecture and landmarks that spread out from its town green. 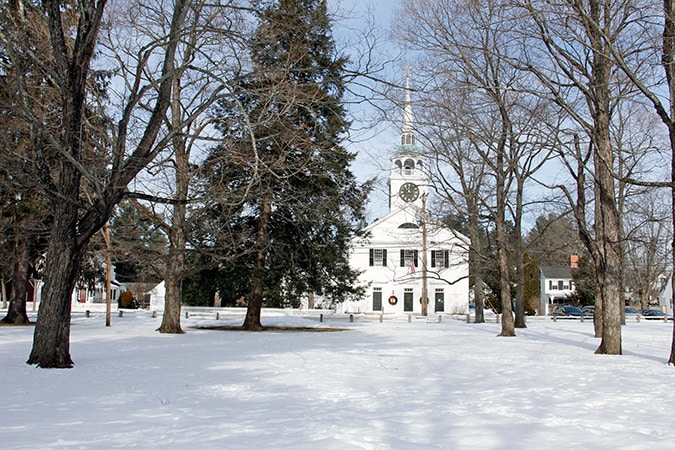 Most folks might choose to visit Amherst in one of the milder months, but the January freeze was in full effect—temperatures having dipped down to single digits — on the day I headed there to meet my tour guide, Alyson Horrocks. A resident of the village, Alyson frequently chronicles the beauty of this and other classic New England towns on Instagram. 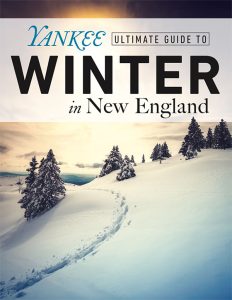 Armed with the knowledge of a local combined with historical tidbits plucked from the pages of Walking Tours of Amherst Village, a publication offered by the Historical Society of Amherst, Alyson guided me around the heart of the town, beginning with its sizable common in the part of the village known as the “The Plain.” 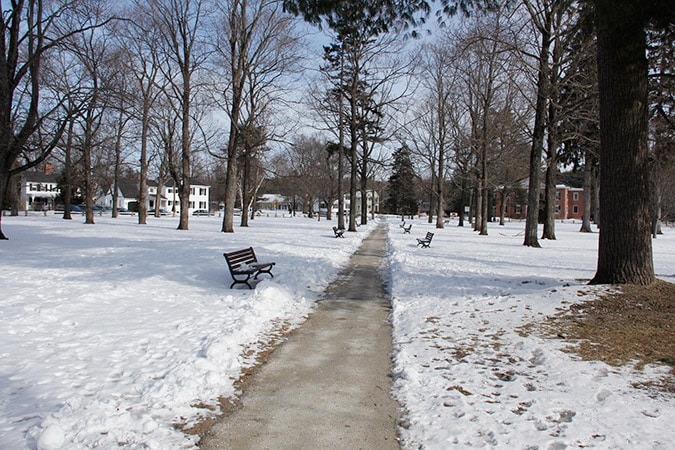 Town commons established in the 18th century, or village greens as they’re more commonly known today, were thought to have been used for militia training, the grazing of livestock, and, at times, public punishment. Encircled by a fence in 1866, Amherst’s Common was dedicated as a park in 1868 and remains so today, retaining many of the icons that grace town centers throughout New England’s countryside.

Monuments scattered about a green offer a narrative of a town’s past — like that cube of granite with the hook poking out of its top that’s alleged to have been a whipping post. But equally telling is what’s not there. In this case, the ubiquitous gazebo is noticeably absent. According to the historical society, residents resisted erecting such a structure in an attempt to avoid the “Victorianization” that was occurring in neighboring towns. 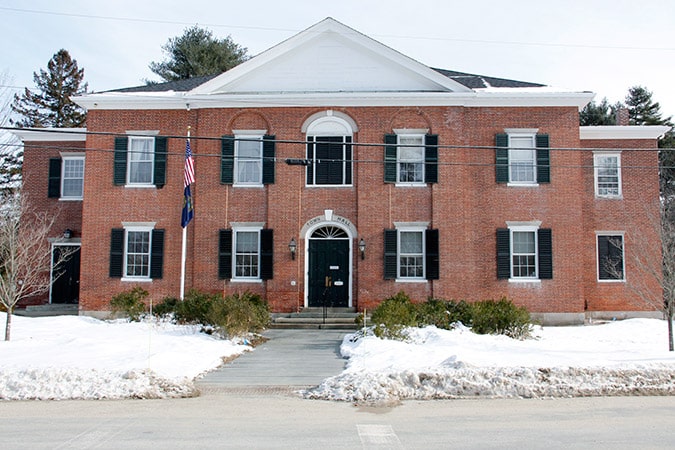 Our tour started at the Third County Courthouse — now the town hall — and Old Burying Ground set on the east side of the Common. The first markers dating back to 1735 were fieldstones, but those were difficult to find under the fresh fall of snow. 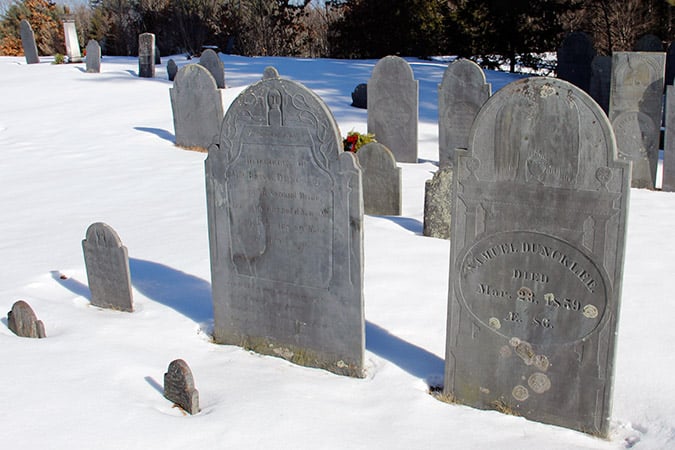 Graves with headstones and footstones.

Spirit faces peer out from the older slabs, and sharp-eyed observers may notice that many graves are bordered by both a headstone and footstone. According to the religious beliefs of the time, these plots were designed to mimic the head and footboard of a bed, because they were seen as temporary resting spots until the resurrection of Christ. 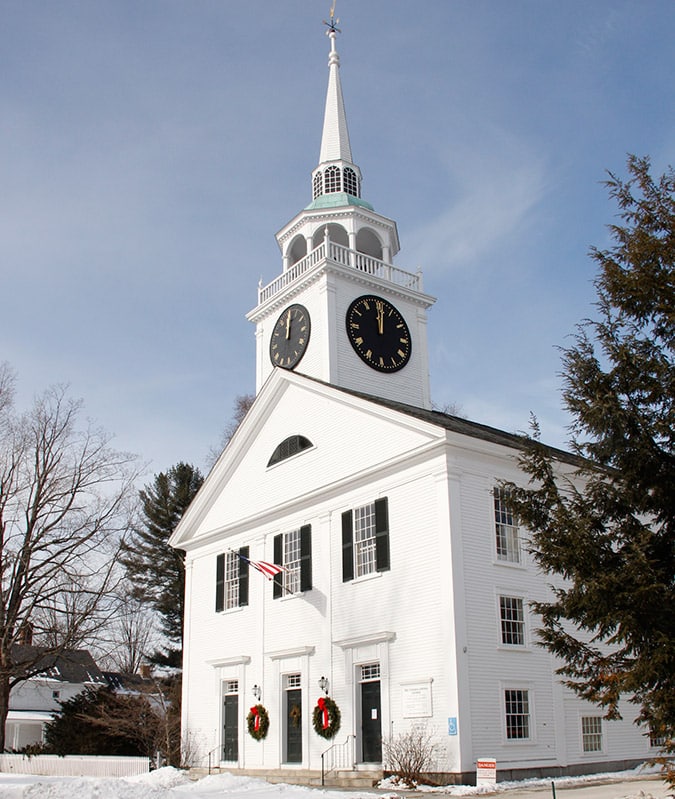 Just as the Common anchors the village, the Second Meetinghouse moors the Common. At the time of its construction in 1774, it was actually set on the Common. The town sold the Meetinghouse to the First Congregational Church and Society in 1832, retaining ownership of the clock tower and rights to conduct meetings on site. The building was moved to the other side of Church Street in 1836 and remains a congregational church today. 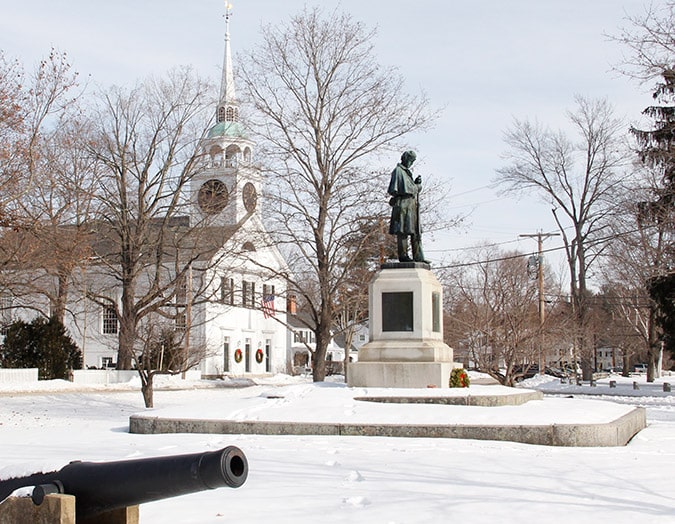 The Soldiers’ Monument stands on a slice of land that separates Church Street from Middle Street. Erected in 1871 to honor the twenty-five soldiers from Amherst who lost their lives in the Civil War, this bronze monument depicts a Union infantryman, his head bowed in contemplation. 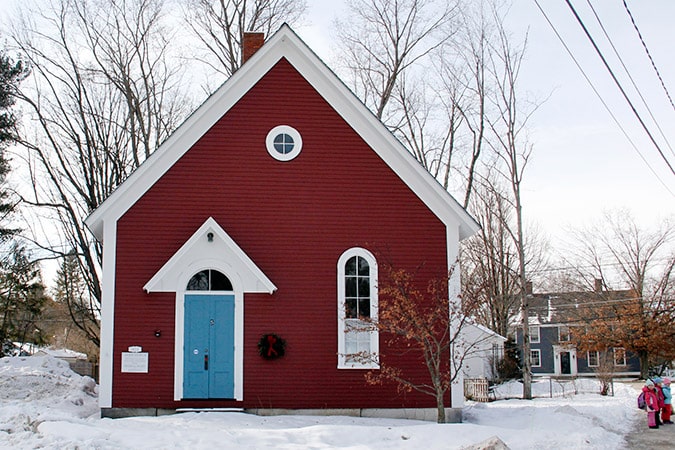 Originally built as a vestry for the First Congregational Church and Society in 1858, the Chapel Museum is one of two museums maintained by the Historical Society today. 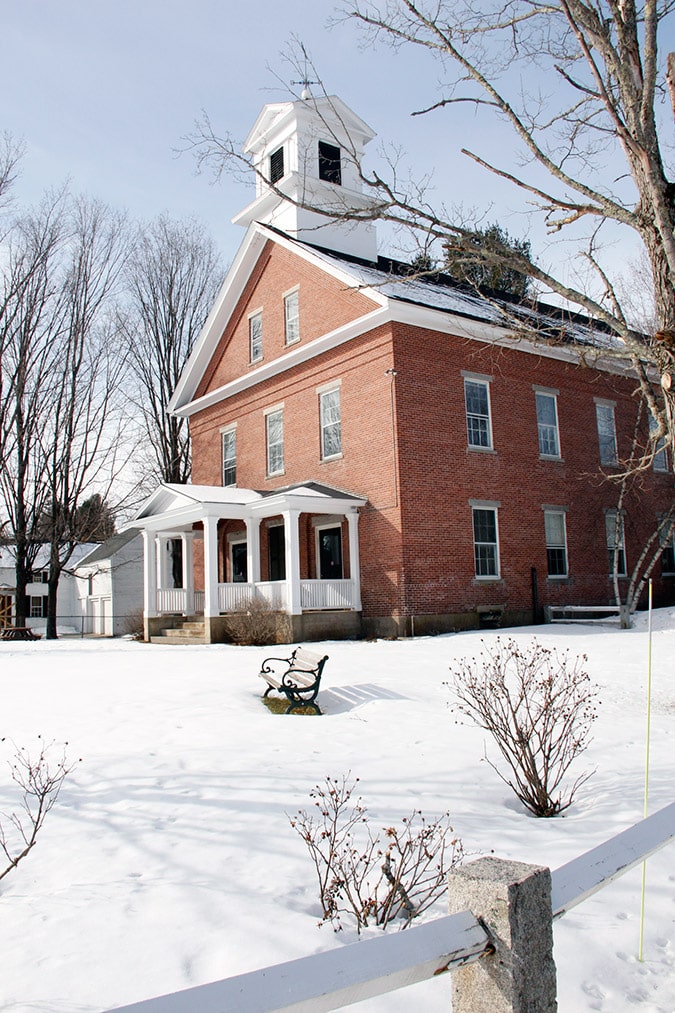 Right next door on the corner of School Street and Middle Street, the Brick School served as a public school from 1854 until 1967. 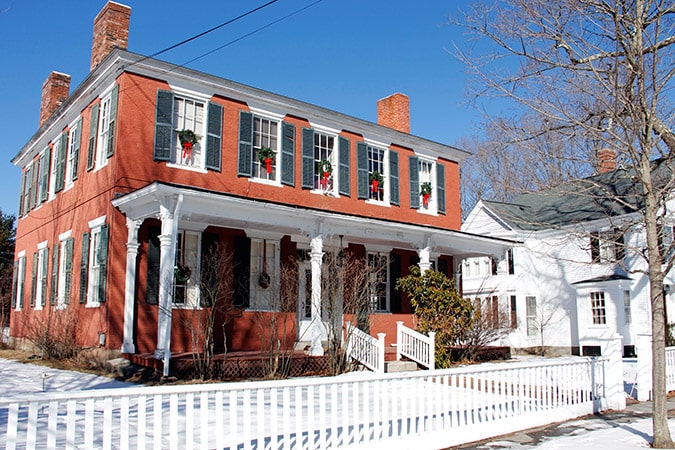 Swoop down School Street, and you’ll find the Hillsborough Bank Building, whose claim to nefarious fame was issuing more notes and loans than its meager reserves could cover. The result: suspension of payments, a flurry of lawsuits, and a bundle of worthless bank notes — a mere three years after the bank’s incorporation. 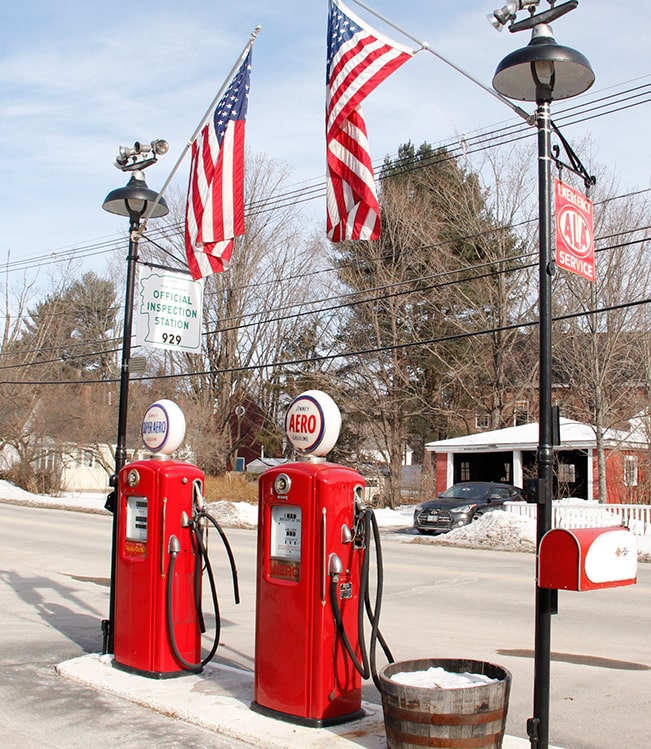 Turn the corner and your eye will be caught by the cherry red gas pumps at Mike’s Auto Service. The fully-operational Jenney pumps, which predate the 1940s but were restored in 1994, are fairly new in historic Amherst terms, but they tug at the nostalgic heartstrings nonetheless. 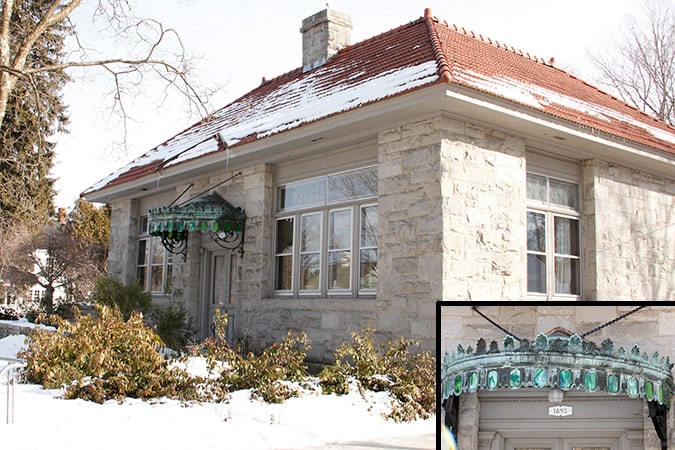 Turning back toward Main Street, we passed the town library, pausing to admire its copper canopy adorned with green swirls of glass. 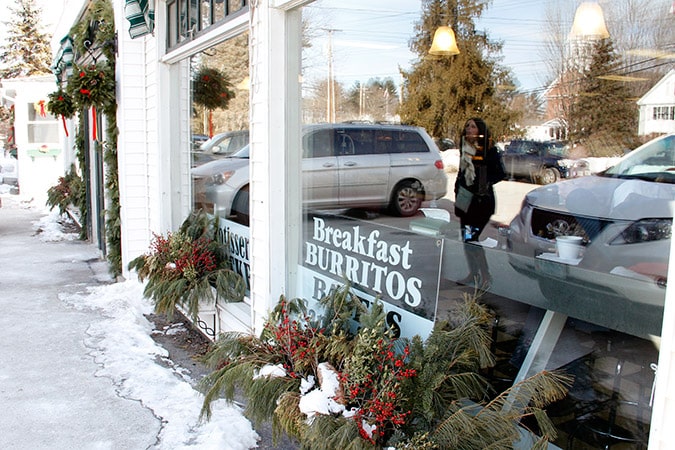 Having toured the Common, the village’s landmarks, and many of the side streets, we were ready to pop into Moulton’s Market — a small grocery store and deli — for a bite to eat. Now a bustling gathering place for locals, the market sits on the site of “Cushing’s Folly,” a three-story brick building that housed a variety of businesses from its inception in 1809 until being razed by fire in 1948.

After warming up in Moulton’s, we were less eager to subject ourselves to the frigid temps and chose to curtail our sightseeing tour. To appreciate the historic offerings of Amherst, New Hampshire, in their entirety, plan to spend a full day walking around the village. 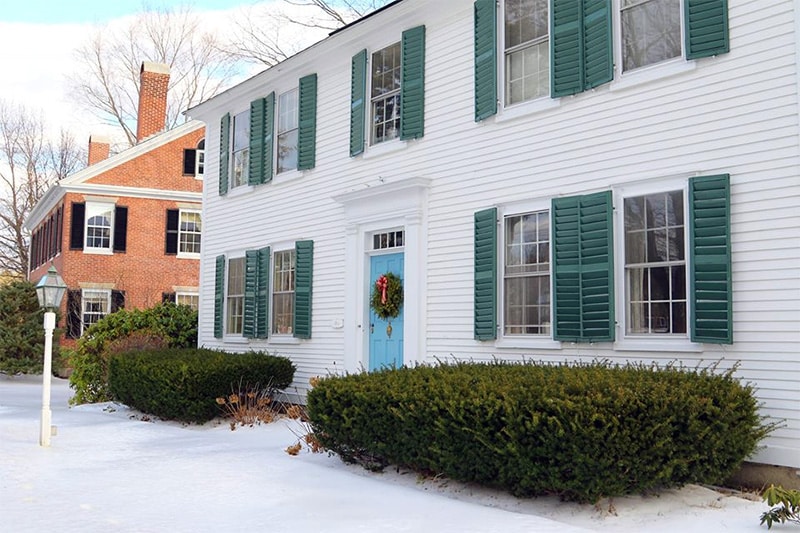 Have you ever visited historic Amherst, New Hampshire?

This post was first published in 2014 and has been updated.

Send this to a friend